It’s been hard to know what to write about recently, after sharing a huge chapter in my life, but since returning from a holiday my daughter and I went on together, I reflected on a couple of things that were significant to me and seemed worthy of sharing.

I love the ocean, and I’ve enjoyed Vancouver for both the waterfront and the metropolitan atmosphere on several family vacations.  It had become an annual visit over the years, and our activities, along with visiting relatives, were generally the same: walking around Lonsdale Quay and Granville Island, enjoying the bustle of the seawall and the ability to spend time just being near the water. But on this trip – the first in over three years – I noticed a difference, probably because I see a lot of things through changed eyes now.  I used to find the busyness of the waterfront exciting, with the stores and restaurants just steps away in every direction, and measured other vacation spots against this one that I always enjoyed the most.  Even travelling to the east coast, which had its own appeal in different ways, didn’t have the same attraction for me. But this time, travelling to new places with a view to finding an escape of sorts from the reality we’re still not accustomed to at home, I discovered that the ocean views along deserted beaches were more comforting and breathtaking than any I had previously experienced. 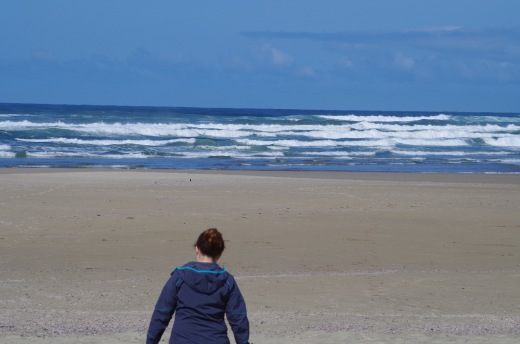 We ventured down to the Oregon coast at the beginning of our trip, and found several spots along the way that were so beautiful we could have just stayed right there, listening to the peaceful rhythm of the waves rolling in, and taking in the view of water as far as we could see.  There was no busyness, no crowd, just serenity, and I had a new appreciation for the lack of “excitement” which, when removed from the picture, allowed us to just be, to just exist there in a place where dreams and wishes were all possible because we were making new memories, and conversation wasn’t even necessary;  we’re both so much alike in our thoughts and we know when to just be quiet because something indescribable is right there in front of us and we want to experience that in silence.  Of course, we had our minion along just for fun, but he was also very quiet 🙂 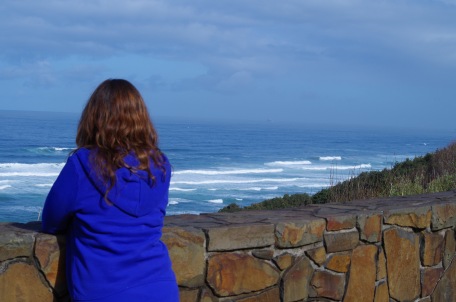 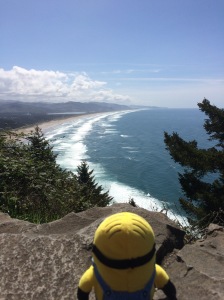 When we reached Vancouver towards the end of our trip, it wasn’t the same as it had been before, the feeling I mean, because it wasn’t “new” and our arrival brought to mind happy memories of family trips that included Pat and his enthusiasm for the area.  It was nice to see family and to spend time visiting, but I noticed that my desire for the particular places of interest had diminished from previous years.  Perhaps it was because my heart is still mourning such a great loss and being somewhere familiar with someone missing won’t ever be the same.  Or maybe it was because I had experienced something else in other places that showed me a bigger picture than I had seen before, one that encompassed more than just a place.

I had wanted to spend a few days just relaxing and living the waterfront life, waking up and going down to the ground level where Starbucks was just round the corner and a bench on the seawall awaited me.  From there I could watch the activity of the people who lived there and regularly walked, ran or rode bicycles along the water, and imagine what it would be like to do that every day.  It was lovely on   a vacation, but as I indulged my whims for the few days we stayed there, I began to realize that for me, this was just a vacation style of living, and not something I would fit into for the long term.  It was enjoyable for sure, but it was also a learning experience, as I processed thoughts of what life would look like for me even if I could one day afford to make such a dramatic move, and I concluded that the actual cost would be much higher than what I was willing to spend in terms of things other than money.

My cousin came one day from another area of the city to meet us on the seawall for a visit, and he shared an analogy with us that stuck with me.  We were talking about how the atmosphere in the area seemed so appealing and was something that many people see and wish they could have themselves, but that it wasn’t – for everyone – necessarily what it appeared to be. He described it, very simply, like this:

A person visits the area, sees the activity, the waterfront lifestyle (walking, running, cycling, sitting in outdoor cafes drinking coffee etc.) and wants it, so they move there.  Once they have left everything else behind and are settling in there, they realize that the lifestyle doesn’t just happen, so after a few days they put on their shorts and go out for a walk or a run along the seawall, stop for coffee or lunch along the way where there are many others doing the same, and each day they begin to mesh into the picture of what life looks like there.  They aren’t necessarily happy or settled, but they look like they are part of the picture.  Meanwhile, someone else is visiting the area, watching the activity, the waterfront lifestyle – of which the first person is now a part –  and wants it, so they move there.  In the end, it is easy for this to become a trend resulting in a lot of lonely people looking for something they thought they saw and would find, but really they’re all doing the same thing, looking for the same thing, and thinking others have found it, when they probably haven’t.

Of course this doesn’t apply to everyone, and it’s certainly no judgment on anyone who does find a happy life there as some do, but it made a lot of sense to me.  He expressed that there are probably a lot of lonely people there and I think he’s right, because the view from your window is only one small part of what makes your house or your community feel like home.  I would love to look out my window every day and see the ocean instead of snow or mud or trees or even other houses.  Who wouldn’t love a spectacular view?

But I would be one of those people leaving everything else important to me behind to take lonely walks on the seawall and possibly become part of a postcard picture that makes it all look perfect to someone who doesn’t know me.  I think I would feel as if I were on a perpetual vacation, which some would certainly love!  But I’m not that person, and with my own lifestyle, philosophy and experiences, I don’t belong on that postcard.  The things that keep me grounded and make my life any kind of life at all, especially after so much pain and loss, are found in my relationships with my children, family and close friends who know my heart.  I couldn’t stand to be hundreds of miles away from any of them.  Making new friends is never a bad thing, and there are good people everywhere, but finding relationships like I have here only happens a few times in a person’s whole life and that’s a pretty big deal to me.

I’ll always enjoy visiting Vancouver, for the family visits with fun, hospitable, and kind relatives who go out of their way to make our visits special, and for the ocean view which remains beautiful to me, along with the other things the city has to offer.  But I suspect I will always be a tourist.